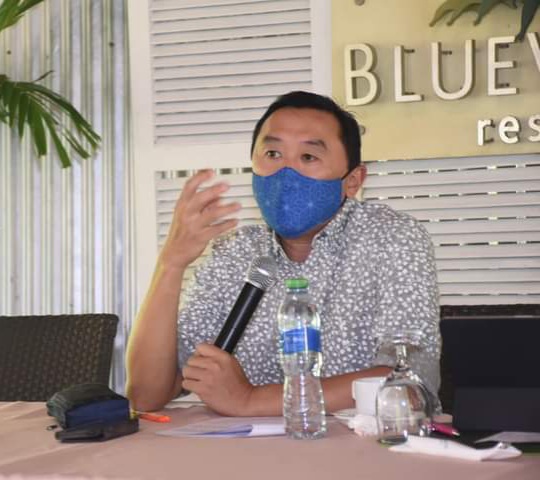 COVID-19 has so hurt Bohol, inflicting about P10 billion in economic losses which Gov. Arthur Yap said scream for recovery strategies effectively responsive to the condition.

The pandemic impact on socio-economy has been most defined by investment, revenue, employment and livelihood lost.

Over 200,000 individuals who were then employed or self employed have lost jobs and livelihood opportunities, adding pain to survival downturn in peace time.

Yap bared the estimated losses in billions worth at his meeting with the Panglao Island Sustainable Tourism Board (PISTB) at the Bluwater Resort in Panglao on Friday.

He acknowledged the important role of the board in reopening the local economy, which one pillar is tourism.

But the governor also hinted of the risk of sudden reopening because the condition demands “calculated, careful” moves.

Recovery from such an unusual economic destroyer like the pandemic should be “meaningful” and “effectively responsive to the condition,” he said.

In a virtual planning workshop facilitated by the Department of Trade and Industry (DTI) on Monday, Yap shared developing value chain approaches to reinvigorate tourism.

Workers in tourism and its affiliate industries have been among the most affected since the earlier part of the COVID-19 attack.

“Nobody has prepared for this perfect storm at this point of human history,” the governor said while citing how the pandemic impact on economic and human activities has been truly massive and crippling.

Predominantly a tourism service and agricultural economy, Bohol draws most of its revenues from OFW remittances, travelers, agriculture and food.

But the province has continued receiving and managing returning overseas workers themselves who have been affected by the pandemic also hitting foreign workplaces.

The tourism value chain planning workshop which ran for four days was in response to the provincial government’s economic stimulus program.

The current value chain of the tourism sector was examined and socio-economic issues and opportunities assessed.

Strategies were formulated and action plans prepared also to revive the micro, small and medium enterprises (MSMEs) along the tourism value chain.

He vowed to find support funds while Congress is currently conducting budget hearings.

Chatto initially discussed with DTI Sec. Ramon Lopez in a budget hearing such helpful interventions as the establishment of as many Negosyo Centers, shared service facilities, and livelihood seeding program.

42% OF WORKFORCE
AFFECTED BY COVID

According to the National Economic and Development Authority (NEDA), the estimated more than 200,000 individuals who lost jobs and livelihood constitute 42% of Bohol’s workforce.

If multiplied by a minimum of four members per family, the number easily reaches to 800,000 individuals or about two-third of the province’s whole population.

The province itself has allocated rice support for tourism and affiliated industry workers most affected by the pandemic.

This is separate from the rice subsidy of the province which has been distributed together with the contact tracing card to every Bohol family.

The losses of the employed and self-earners who have lost jobs or been denied livelihood chances could amount to at least P25,000 per worker.

The governor said the amount translates to about 10 cavans of rice lost from every family.

This should tell everyone to cooperate in the effort to contain the threat of COVID-19, Yap said, even if active cases have gone down significantly from alarming increases in previous weeks.

The message was repeated by the governor in his rice and contact tracing card distribution rounds in Dimiao, Maribojoc and Cortes on Tuesday and Thursday.

Everyone has to discipline and keep himself safe and healthy if the economy has to reopen even yet gradually, Yap stressed.

Even doctors said being dumb to safety protocol calls can only exhaust in endless COVID-19 responses the otherwise dwindling resources and overstress both the healthcare system and economy. (Ven rebo Arigo)