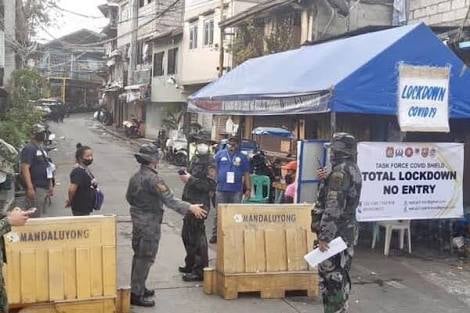 The Department of the Interior and Local Government (DILG) said today that 112 areas all over the country have been placed by their respective Local Government Units under localized or granular lockdown showing that LGUs have been implementing the LGU-led zoning containment strategy developed by the National Task Force against COVID-19.

According to DILG Secretary Eduardo M. Año, localized lockdown is the best approach in containing COVID-19 as it surgically targets areas where cases, either positive or suspected, are concentrated. He says that the 112 locally quarantined areas in the country as of June 21 prove that with proper implementation, the spread of the coronavirus can be contained on the community-level.

“Localized lockdown is like hitting COVID-19 at its source which has been proven to be effective especially in the 112 areas where it is currently being implemented. It really works since the hot zones areas are secluded from the rest of the community, hence, stopping the transmission to other communities,” Año says.

The National Task Force Against COVID-19 led by Defense Secretary Delfin Lorenzana recently issued the Operational Guidelines on the application of the zoning strategy in implementing the National Action Plan against COVID-19.

DILG Undersecretary and Spokesperson Jonathan Malaya said that of the 112 areas that have been placed under localized lockdown as of June 21, 67 are in the Cordillera Autonomous Region (CAR); 18 in National Capital Region, 19 in Cebu City, 1 each in Cavite, Quezon Province, Leyte, and 5 in Cagayan de Oro City.

CAR has 67 areas which have carried out or are carrying out localized lockdown encompassing 7 municipalities, 51 barangays, 1 purok, 1 subdivision, 2 buildings, and 5 zones within Mt. Province, Province of Apayao, Kalinga, Ifugao, Abra, Benguet, and Baguio City.

Malaya said that the decision of the LGUs to put their barangays under localized lockdown is “contributory to the low number of positive cases in CAR.” As of this writing, CAR only has 109 confirmed COVID-19 cases, 62 of which are active while 42 cases have already recovered. It currently has a 1.8% case fatality rate.

In Cebu City, there are 19 containment zones including Sambag II, Punta Princesa, Tejero, and Inayawan. The following barangays, on the other hand, were identified as hotspots and are under strict lockdown: Sambag II; Kamputhaw; Sambag 1; Basak San Nicola; Mabolo; Guadalupe; Lahug; Duljo Fatima; Tinago; Tisa; Ermita; and Tejero.

Malaya said that since the beginning of the GCQ/MGCQ, the national government has shifted to the zoning containment strategy since the COVID-19 cases being reported now are clustered in several municipalities and communities, making large scale containment operations and interventions no longer feasible, efficient, and cost-effective.

“Thus, the NTF saw the need for an LGU-led containment strategy where LGUs could monitor the pandemic more accurately in their respective areas and allow them to adopt a calibrated response that can adapt to emerging conditions in their areas, enabling them to stay ahead of the outbreak trajectory,” he said.

The DILG Spokesperson said that LGUs, with the concurrence of their regional IATF, are encouraged to place areas, may it be a street, purok, barangay or the whole city or municipality under localized lockdown ‘if the numbers and data point towards that direction.’ “LGUs must do all necessary precautionary measures for the safety of their constituents including the localized lockdown.”

Meanwhile, he reminds LGUs which impose localized lockdown that they must have organized quick response teams (QRTs) that shall carry out the test-trace-treat strategy against COVID-19 in the lockdown areas. “Mahirap din naman yun basta-basta lang tayo magdeclare ng localized lockdown with no system in place.”