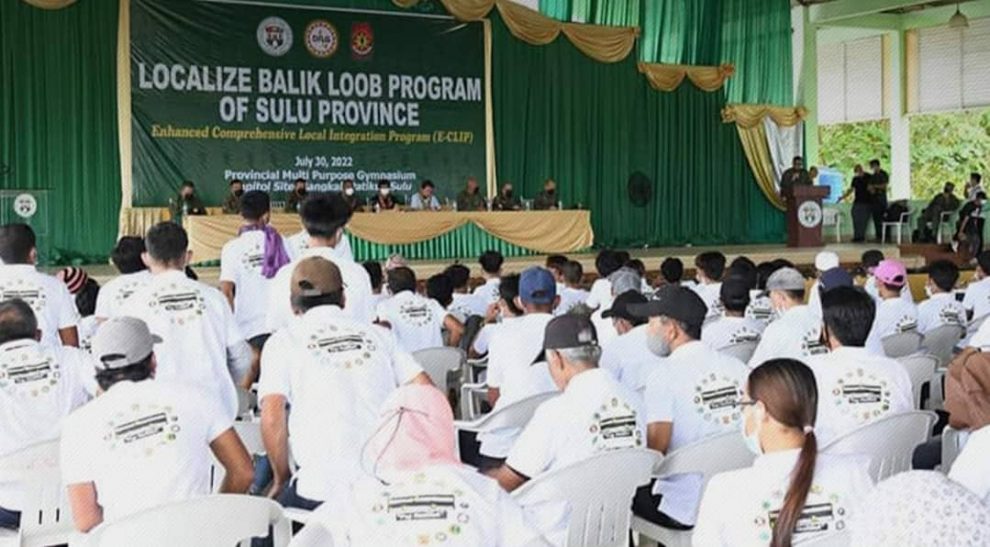 A total of 100 Abu Sayyaf Group (ASG) members and supporters in the province of Sulu have decided to lay down their arms and return to the folds of the law.

Department of the Interior and Local Government (DILG) Secretary Benjamin Abalos Jr. led the formal surrender and acceptance of the Former Violent Extremists (FVEs) in a ceremony on Saturday in Patikul town.

All of the surrenderees came from the different municipalities in Sulu, namely, Indanan, Omar, Maimbong, Panamao, Talipao, and Patikul. They also surrendered a total of 22 firearms.

With their surrender, the FVEs will be enrolled in the government’s Enhanced Comprehensive Local Integration Program (E-CLIP) to receive financial and livelihood assistance.

Under the E-CLIP grant, qualified beneficiaries are entitled to guaranteed safety and security; cash assistance like PHP50,000 livelihood assistance; PHP15,000 for mobilization expenses; and firearms remuneration amounting to the value of turned-in firearms.

E-CLIP is a flagship program of the previous administration that aims to help members of the Communist Party of the Philippines-New People’s Army-National Democratic Front (CPP-NPA-NDF), and Militia ng Bayan (MB) to restore allegiance to the Philippine Government. It was expanded in 2020 to include FVEs in its beneficiaries.

A chance at a fresh start

“Sattar”, 41, one of the surrenderees who has been an ASG combatant for over 10 years, bared during the ceremony that they were forced to take up arms due to their circumstances in life, particularly the lack of opportunities.

“We were forced to fight the government because of our situation in life. But now, the government is showing sincerity in helping us so we want to return and start over again,” he said in vernacular.

Secretary Abalos echoed this, saying that the government, through programs such as the E-CLIP is aiming to address the roots of the country’s problem on terrorism.

The FVEs also received food packs from the Bangsamoro government’s Ministry of Social Services and Development, and cash assistance worth PHP222,000 from private stakeholders. (DILG Philippines)