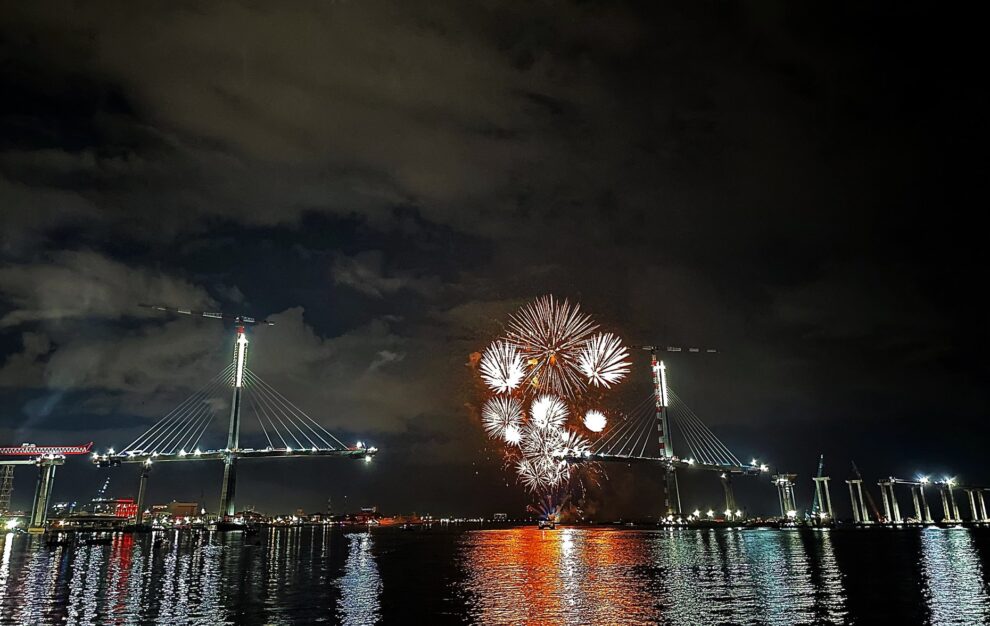 “Once all punch list items are checked, we target to open CCLEX to our stakeholders or valued users by mid to late February 2022,” Cebu Cordova Link Expressway Corporation (CCLEC) general manager Allan Alfon in a phone interview with Manila Bulletin.

Alfon said that overall engineering, procurement and construction (EPC) progress of CCLEX is at 72.73 percent as of March 2021 as it has completed the construction and installation of all eight 40-meter-tall crosses, including its light fixtures on top of the two CCLEX pylons in the Mactan Channel.

According to its project developer, Cebu Cordova Link Expressway Corporation (CCLEC) that the P30-billion CCLEX is a toll bridge expressway that will link mainland Cebu through the South Road Properties (SRP) in Cebu City to Mactan island through the Municipality of Cordova.

“CCLEX is an engineering marvel using the latest technology in bridge construction and surely an iconic structure for Cebuanos to be proud of.  It will not only decongest traffic in the two existing bridges but also provides enormous activities that benefit not just Cebu’s economy but the entire Central Visayas region as well,” Alfon said.

Alfon added that the public was given a first glimpse of the eight huge crosses that adorn the bridge that were blessed and lighted last April 15 as part of the 500 Years of Christianity celebrations in the Philippines.

These crosses were artistically designed taking inspiration from the cross planted by Portuguese explorer Ferdinand Magellan 500 years ago and is a proper tribute to Cebu being the cradle of Christianity.

At the Cebu South Coastal Road (CSCR) on ramp section of the project, all its piers or structure support have been erected as well as the portal frame; piers and headstocks are ongoing and concreting of the roadway has also been done, the report read.

CCLEC said that the construction of the 200-meter permanent pedestrian footbridge is already completed with the installation of the six prefabricated walkways.

The footbridge starts near the U-turn slot of the South Road Properties’ welcome tower and will serve as pedestrian’s access to the sidewalk of the CSCR on ramp. Sidewalks are provided in the entire stretch of CCLEX.

At the Cebu and Cordova viaducts, the installation of girders is underway, and the embankment works has also now reached the town of Cordova, particularly at the Mactan Circumferential Road, which is the end of the CCLEX connection in the town.

The report said that 20 units of vent pipes are scattered along the causeway’s stretch to equalize the flow of seawater in the Cordova Channel and as to the four low-lying bridges, all its foundation works have been completed. These bridges will serve as access of the Cordova fishermen to their fishing ground.

According to Alfon that the pandemic is still the biggest challenge for them to continue to address squarely the progress of work.  “We had expats stranded abroad, work slowdowns if a worker is tested positive but we do immediate contact tracing, and hopefully we can continue to manage well supply chain issues,” he added.

CCLEC bared that the company, a subsidiary company of Metro Pacific Tollways Corporation (MPTC) will maintain and operate the facility under a joint venture agreement with the Local Government Units of Cebu City and Cordova.

The CCLEX is designed to have two lanes in each direction with an estimated 50,000 vehicles daily easing the traffic at the Marcelo Fernan Bridge and the Mandaue-Mactan Bridge.  The bridge has a design speed of 80KPH with a navigational height of 51 meters to allow large vessels to pass underneath the bridge, CCLEC bared.

CCLEC is a wholly owned subsidiary of MPTC, the toll road arm of Metro Pacific Investments Corporation (MPIC), a publicly listed infrastructure holding company and a member of the MVP Group of Companies.

MPTC is the largest toll road concessionaire and operator in the Philippines, which expansion goals include establishing toll operations in the Visayas, other parts of the Philippines, and in neighboring countries notably Vietnam, and Indonesia.